As more voters turn to mailing in their ballots instead of voting in person due to safety concerns about Coronavirus, swing state citizens worry about votes being discounted because of mail-in voting technicalities. In addition to void votes, both the Democratic and Republican parties worry that international interests could tamper with mail-in voting. 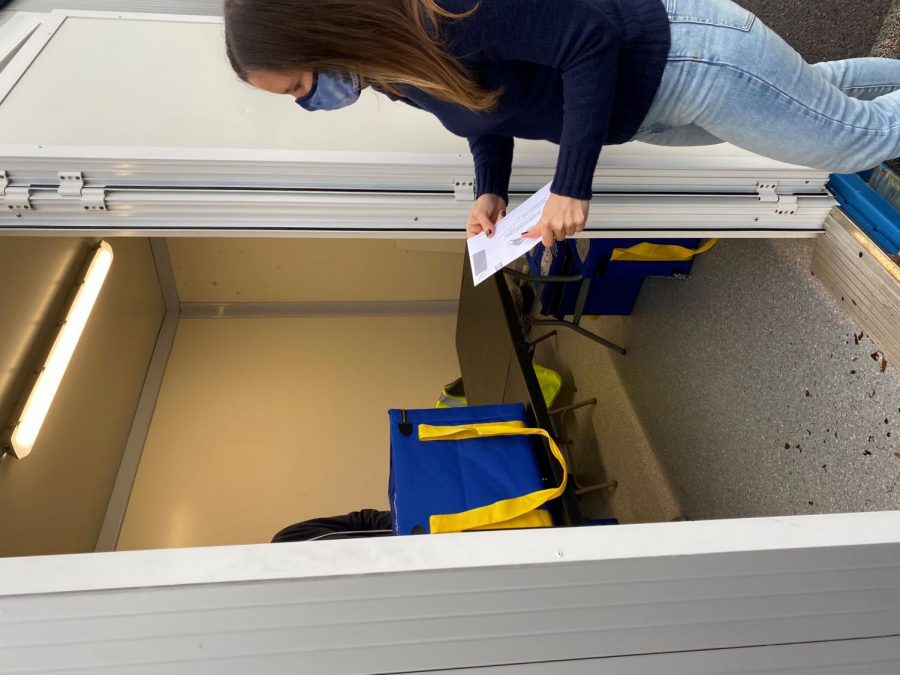 Voting her voice...Participating in the 2020 Presidential Election, Harleysville resident Jennifer Elwell sends in her ballot via mail on October 29 at the Montgomery County Secure Ballot Drop Box in Skippack, Pa. The ballot drop box is supervised by monitors to ensure fair voting practices. Arrowhead photo by Claudia Elwell

As a result of this year’s Coronavirus pandemic, some American citizens are concerned with how mail in voting may affect the outcome of the 2020 presidential election on November 3.
Coronavirus is not the only factor that people consider when deciding whether to vote by mail or in person at the polls.
Mail-in voting, also referred to as absentee ballots, is using mail to deliver a voter’s ballot for an election.
Mail-in voting began as a way for Americans who were unable to attend the polls, such as people in the military, to cast their votes.
According to a study by the Pew Research Center on the effects of Coronavirus on mail-in voting , the average amount of mail-in votes in the primary elections before March 13 (when President Donald Trump declared the Coronavirus as a national emergency), was 11.3%, while afterwards it was 51.5%.
Some first-time voters, some of whom are highschool students, face decisions about how to submit their vote in the upcoming presidential election.
Senior and first-time voter Samantha Tiley said that she requested her mail-in ballot, but ultimately decided to vote in person because she was afraid that her mail-in ballot wouldn’t be counted.
The Pennsylvania Supreme Court recently ruled that secrecy envelopes are required for a mail-in ballot to be counted. Secrecy envelopes go over a mail-in ballot as extra protection to the anonymity of the voter.
AP Government teacher Amanda Gale said that the requirement of a secrecy envelope is “one more hoop to jump through.” Gale thinks that votes may be deemed void due to using incorrect mailing format.
“A lot of people may not have their votes counted because of something as silly as they didn’t put it in the right envelope,” Gale said. Gale said secrecy envelopes may do more harm than good.
Some think that votes will not be tampered this election. Social studies teacher Melissa Tiffany says that each state provides many protections against tampering with ballots.
Tiffany thinks that an international party will not be able to tamper with the election without the United States realizing.
“People will notice,” Tiffany said.
To others, the requirement of secrecy envelopes isn’t a problem because of its added protection to the anonymity of the voter.
According to social studies teacher Jessica Muller, concerns of election tampering warrant the extra protection.
“With a past history of voter fraud, additional steps to prevent tampering with votes seem understandable,” Muller said.
Some people worry that mail-in voting requirements may affect certain voting demographics more than others.
According to a poll done on 2020 mail-in voting by the Pew Research Center, 58% of Joe Biden supporters said they would prefer to vote by mail compared to 17% of Donald Trump supporters.
According to Muller, the Pennsylvanian Democratic party may have real votes voided because of technicalities with the secrecy envelope requirement.
“If most Biden voters vote via mail and the vote is somehow tampered with–that is a huge problem for the Democratic party,” Muller said.
Some worry that another country will interfere with the election. Gale says it is very unlikely that foreign parties will interfere with the presidential election because they wouldn’t have official ballots.
“It’s not sensical because you have to be a registered voter to vote,” Gale said.
Tiffany also believes that international interference in mail-in voting is unlikely.
“It’s like Monopoly money. I cannot take it down to the store and buy a car with it. Just like Russia can’t print 10,000 ballots and drop them off at the local post office to be counted,” Tiffany said.
Tiffany thinks it is important to vote no matter the circumstances.
“Vote like you don’t have any privileges. Protect your fellow man, and if you have privilege, use that power to help others,” Tiffany said.