GSA partakes in Day of Silence

The Gay-Straight Alliance brought awareness to anti-LGBTQ+ acts with a vow of silence on April 8. 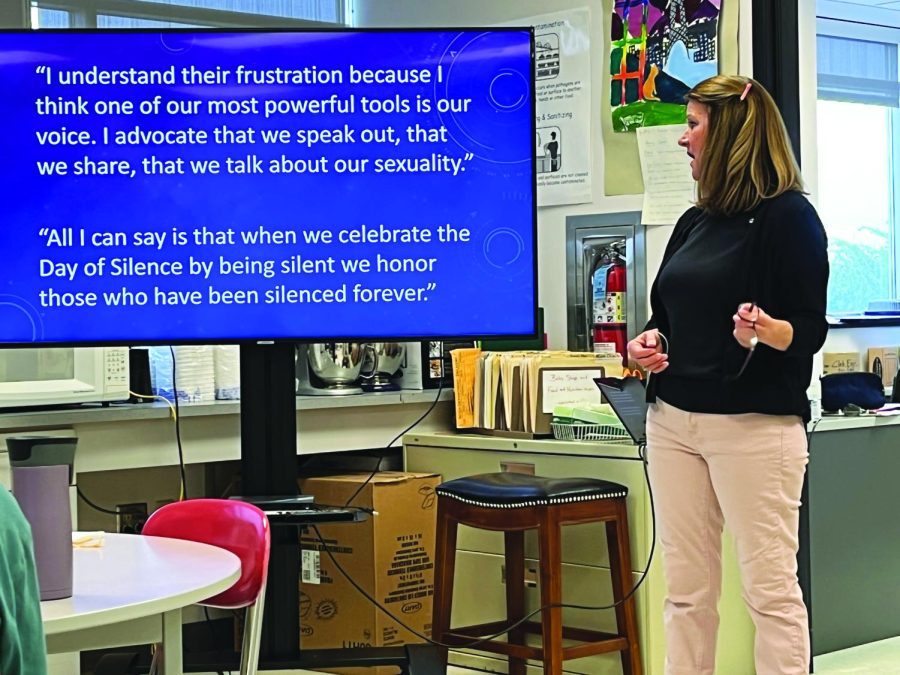 Discussing identity…Displaying quotes from Matthew Shepard’s mother, Judy, GSA co-advisor Allyson Fitzpatrick presents a slideshow at the Day of Silence educational meeting held on April 5. Shepard’s words were in response to a question about LGBTQ+ frustration asked at the end of an educational seminar held at Montgomery County Community College in 2014.

To educate others about anti-LGBTQ+ discrimination, the school’s Gay-Straight Alliance (GSA) honored the National Day of Silence (April 22) on April 8 by staying silent for forcibly silenced LGBTQ+ members.
According to GSA co-advisor Allyson Fitzpatrick, the Day of Silence is an annual day where queer people and allies hold a vow of silence in honor of LGBTQ+ members who have faced discrimination.
“Specifically, it honors Matthew Shepard, who was killed and left for dead and was silenced forever,” Fitzpatrick said.
GSA officer Reagan Lisius said that the Day of Silence is important to the LGBTQ+ community because “it memorializes those who can no longer be with us and speak out for their rights.”
According to Lisius, this day, and the vow of silence people take, symbolizes the silencing of others in the past due to their LGBTQ+ identity. “We are some vocal students in your classes and it’s so strange when those students go quiet for a day,” GSA officer Logan McCormick said.
McCormick said that the vow of silence helps to bring awareness to those whose voices have been suppressed forever because “that silence is deafening.”
“It’s this purposeful silence that people will recognize and know, and that’s why we do it here, too,” GSA co-advisor Jon Timmons said.
According to GSA officer Alanna Hilton, this year the club held an educational meeting about the Day of Silence on April 5 where they passed out cards about the Day of Silence to participating students.
“All of our students should have one and we made extra copies in case the club members want to give it to their friends to show to their teachers,” Hilton said.
According to Timmons, the cards help to explain to teachers of participating students what the Day of Silence is and why the student is remaining silent for the day.
Fitzpatrick said that the Day of Silence does have rules, one of which being that “if [students] have a presentation that they have to give, they have to give it.”
However, students and staff are allowed to remain silent throughout the day if they mention to their classes what their intention is for the day.
According to Lisius, more information about the Day of Silence can be found on the Gay, Lesbian and Straight Education Network’s (GLSEN) website.
Along with researching with GLSEN, Timmons said that looking into recent history can help as well, specifically with Matthew Shepard’s mother. “His mom specifically continues to [do] seminars and workshops across the country to educate [many] high school and college-level students about LGBTQ issues and awareness,” Timmons said.
According to Hilton, even if students do not participate in the Day of Silence with a vow of silence, they should still respect those who are.
Hilton said that non-participating students can still talk with their friends who are, however, “instigating them to talk [is] super unnecessary.”
On April 8, the Souderton administration held a moment of silence for the Day of Silence during daily announcements.
Some students and teachers further showed their support for those participating with rainbow-colored ribbons and hearts.
According to Lisius, students should not take advantage of their peers’ silence. “Don’t take advantage of our silence and don’t taunt us for being quiet,” Lisius said.