To prank or to be pranked, that is the April Fool’s question

As April Fools Day rolls around, stories of past pranks are circulating. Whether being the prankster or being the victim of a prank, recounts of these stories remain memorable. 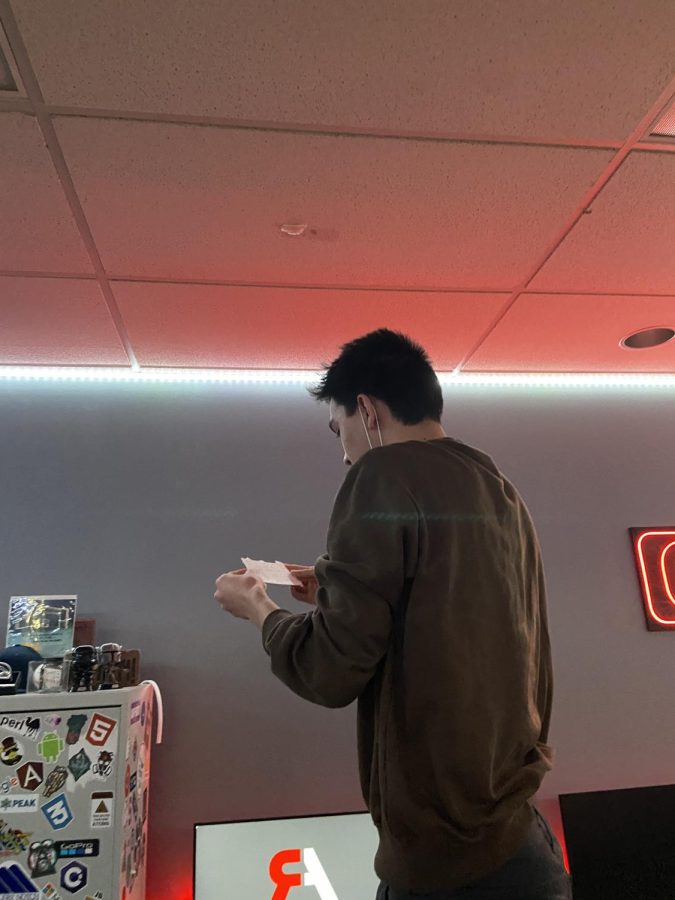 The ultimate prank…Discovering a clue to a scavenger hunt, senior Eduardo Lai reads from a notecard created by junior Simon Hershberger. The scavenger hunt was created months ago for the Red Alert members to uncover.

Through a bit of mischief, students and teachers reflect on their past pranking stories. The pranks range from harmless tricks to fun jumpscares.
According to History.com, April Fools Day is speculated to have originated in 1582. The holiday centers around pulling practical jokes on friends. Each year, people either fall victim to a prank or cause mischief themselves.
Junior Marcus Smith said that he cannot remember a time that he has been pranked. However, Smith recounted a time that he bamboozled his brother.
“I taped a bunch of tape in front of my brother’s door as he was sleeping, and he woke up and went right through it,” Smith said. According to Smith, his brother was upset by the prank.
Another student, senior Kenna Duffy tricked her dad, also using tape.
“I taped a picture of a leek vegetable and I ran to go get my dad,” Duffy said, “And I was like, “Dad, there’s a leak under the sink.”
Some pranks are performed over a long period of time, according to senior Ashlyn Odenwald.
During her sophomore year Graphic Design class, she and other classmates worked together to mess with another student. “One day, we started putting grapes in the side of her bag and I don’t know if she ever noticed,” Odenwald said.
According to many pranksters, the best pranks are pulled with more people.
Junior Adelyce Darcy was part of a trick in which her classmates ran to another room while their teacher was on the way to the class.
“We all ran into a [dark] classroom across the hall and we all just sat there and our teacher came,” Darcy said.
When their teacher came back, Darcy said that she was wondering where everyone was. Another group prank that students pulled revolved around a school musical event.
The evening of a band concert, senior Preston Ziegenfuss and other classmates stacked several folding tables where the director’s music stand was supposed to be.
“We carried [the tables] out onto the stage and there was a study hall in there but we acted like we were supposed to be there,” Ziegenfuss said. “[Our director] did not go out into the auditorium until the concert was supposed to start, and the tables were all still there as everyone’s parents arrived.”
According to Ziegenfuss, their director addressed the matter and it was handled moments before the concert began.
However, mystery may still remain. “He doesn’t know that we did that,” Ziegenfuss said.
Other pranks have backfired, according to sophomores Margaret Donnelly and Jessica Calin.
While hanging out together, Donnelly attempted to prank Calin, but Calin ended up pranking Donnelly before she could pull it off.