From taking math, English, social studies and science classes, people have opposing views on what color matches to each subject. The colors most associated with each are blue, red, yellow and green. 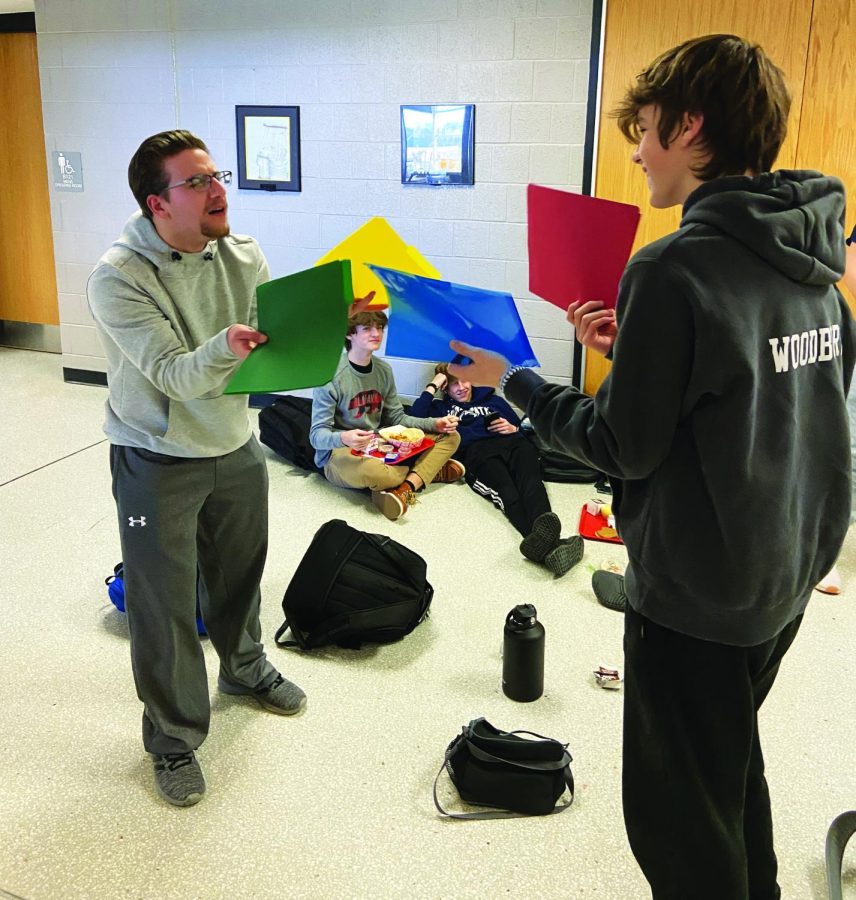 Colorful competition...Arguing over school subjects in correlation to colors, sophomores Ben Ekker (left) and Nathan Woodbury state their cases. The subjects of math, English, social studies and science are up for debate.

Through conversation, students have made their own sentiments on which colors match to certain school subjects. Students associate these colors and classes in their minds without evidence, only intuition.
When it comes to highly controversial topics, there is a plethora of opinions out there. Many conversations that people have daily involve their opinions and can sometimes lead to arguments.
The particular argument of school subject colors has been stirring through the halls and circulating throughout social media. Some people have strong stances on what color a subject like math goes with.
Sophomores Naomi Thompson, Zimri Ramos and Giovanah Heller each agree that math is red, English is blue, social studies is yellow and science is green. “I think if you do it another way, it’s wrong,” Thompson said, “but I also won’t yell at you for it.”
Many times, students make these connections based on content learned in the classes, or the school supplies they had for the classes. Most can agree that science correlates to the color green. “Science has to be green,” senior Nevin Allen said. “I just feel the chemical vibes.”
Freshman Elizabeth Kane has a similar point of view about science being green. “I feel this way because green is like a color of nature,” Kane said. For some students, this one is a no-brainer. “Science is obviously green, I think we can all agree on that,” junior Amelia Haworth said.
Contrary to this popular belief, there are several outliers including sophomore Robert Trost who feels otherwise. “I’d say science is blue,” Trost said. A total tally from this reporter’s sources of science correlating to green is 10 out of 15.
When thinking about social studies, most students thought of yellow, with a few outliers matching them to other colors.
Senior Bailey Mitchell changed his mind after initially contemplating this subject. “Social studies is green. No wait, science is green and social studies is yellow,” Mitchell said.
Freshmen Rachel McLaughlin and Lindsey Yanacek differed from most other students in their opinions. “Social studies is blue for sure,” McLaughlin said. Yanacek agrees. The most conflicting opinions are between English and math. Some students feel that English is blue, while others feel it is red. “Red has to be English,” freshman Cordelia Lorenz said. “It’s just how it is and if anyone thinks any other way, they are wrong.”
In contrast, Kane believes that red goes with math and English goes with blue. “Red is a color that scares you naturally, so red and math go together because they are both scary,” Kane said. “Blue can be very calming, and English is calming like reading is.”
Lorenz disagrees with Kane’s assessment, saying “Oh my [goodness,] that is literally so wrong.” According to sophomore Lily Hassett, “red is math, blue is English, yellow is social studies and green is science,” Hassett said while classmates simultaneously shouted “no” repeatedly.
Seniors Carolyn Mowery and Kate Taipale disputed their views. “Math is blue, 100%,” Taipale said.
Mowery disagreed, stating that science is green, yellow is social studies, red is math and blue is English. “That is the only right answer,” Mowery said.
Other classmates stated their views against one another. Sophomores Ben Ekker and Nathan Woodbury debated the matter and came to different conclusions.
Ekker said that green is science, blue is math, red is social studies and yellow is English.
Woodbury opposed and said that red is math, green is social studies, yellow is English and blue is science.
Yet, some classmates agreed when conversing about each subject. According to seniors Charlotte Baumgartner and Katie Mellot, yellow is social studies, green is math, blue is science, and red is English.